The bus arrives, he gets off the bus, and I see him looking at me across the street. His eyes telling me the beginning of a story, before even opening his mouth.

“Dad, this boy poked me in the eye at lunch on purpose, and then this other older boy was messing with me on the bus. I kept telling him to stop, and tried to not sit near him but he followed me, and then pushed my head into the window. These boys pick on a lot of us in the front.”

With tears in his eyes and a quivering lip he stood there on the sidewalk next to me, and waited until the bus passed. I responded by giving him a hug and saying, “buddy.”

I didn’t know what else to say, so I just asked him how he dealt with it and kept trying to encourage him and let him know it’s not his fault some boys choose to be mean, even when he is trying to be nice. In the middle of it all I gave him a little taste of a story I was reminded of in the recent movie American Sniper. As the story goes, I told him about three different types of people: Sheep, Wolves, and Sheepdogs…

Granted, I did not quote LTC Dave Grossman’s speech verbatim, nor did I quote from the movie. I presented this to my 6 year old, in a way he could understand and grasp, and gave him examples of choices he and some of the boys at his school had made. He understood as much as he could, and the way I normally gauge these conversations is by the types of questions he asks afterwards. He asked “Can you sometimes be both bad and good? Or maybe a little bad but a lot of good?” I told him most people are this way, and even though there may be a select few who are just completely rotten, it’s rare. He paused for a second, and then asked “Dad, can I be a sheepdog? Are sheepdogs like soldiers for America? Like Uncle?” I sensed this was going down a path I wasn’t sure how to navigate just yet, but I did tell him he can do and be anything he wants. I then directed the conversation towards reminding him to not let anybody pick on him or his friends, and if they start something he has my permission to finish it. Hit hard, and hit fast, I told him.

I don’t want him to feel the pressure he needs to always be a hero, however I do believe having the tension there is good. As a father I want to help him build confidence and bravery to stand up and face the wolf, as well as instill courage to do heroic things.

After all, he will (hopefully soon) be a big brother and will need to learn how to teach his little bro all of this. How to be brave, courageous and loving all at the same time. I think, after reading Kim’s text to me the other day, he’s on the right path… 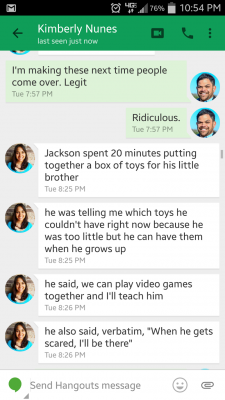