Jack and the Cup 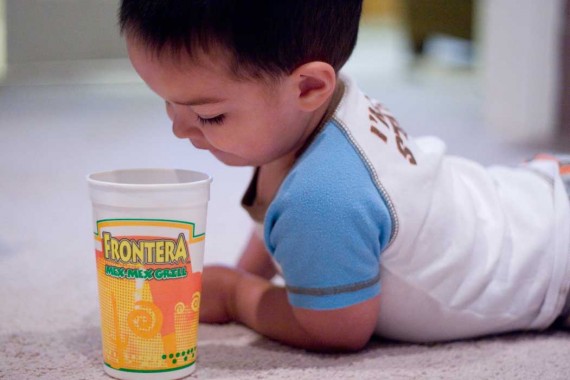 Every night I take Jack to the bathroom and give him a bath. Last night was no different. I let him grab a few toys like Buzz and Fly (an airplane), and we proceeded to head to the bathtub, our normal routine. I start filling the tub, take off his clothes and picked him up to place him in the water. The minute the water touched his toes, it happened.

Kim has been doing such a great job with this whole potty training business, since she’s a SAHM she has been responsible throughout the day to make sure he starts using the “potty.” Well every night, as I was saying, I give him a bath. Normally before the bath I ask him if he needs to go potty. He says yes, and I take him and place him on the big toilet, he does his business and flushes.

Last night, I forgot that step.

So the water touches his toes and he begins peeing. Using my ninja skills I grabbed the Frontera cup that we use to wash his hair and I catch the pee in the cup before it splashes down. Ok I wasn’t that quick but I got the majority of it in the cup. I take the pee, pour it in the toilet and flush. I washed out the cup, finished the bath, and put him to bed. I didn’t think twice about what just went down.

Fast forward to this morning on my way to work, I get a phone call from Kim and she says, “You will NOT believe what YOUR son just did.” I love it how when he gets in trouble he’s MY son. She begins telling me that she went to do her normal morning routine with Jack where she asks him if he needs to go potty, she takes off his pullup, or underwear or whatever, and sends him in the bathroom to sit on the potty. She said he was in there a while, so she went to check on him and there he was.

Cup in hand and peeing in it.

Kim said something which startled him causing him to finish outside of the cup. Prior to being startled, apparently he was aiming very well. Good job Jack.

So I respond to what she’s telling me with a “Oh no,” and it clicks with her. “You taught him that?!” I told her the bathtime story, and we laughed. Buddy was just mimicking exactly what I showed him the night before.

What did I learn? How about an instant Proverbs 22:6.

Seriously though, it’s amazing just how fast children mimic what they see, and unfortunately not all children have a positive model to mimic. I try and do my best yet sometimes I slip, but hey, I was just teaching him long road trip survival…

Time for y’all to share now, what was one funny thing you did where your child instantly mimicked you?

38 responses to Jack and the Cup