The Pie That Binds 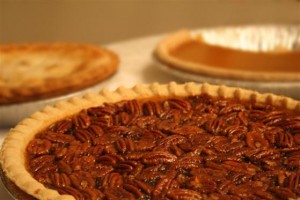 Over the weekend I took Kiss and Madi to Dunkin Donuts to spend the rest of our $6 on the gift card I received from one of my awesome Transit boys. I finally got a chance to ask them a question I’ve been trying to ask since the beginning of the year. This deliberate father/daughter(s) time was inspired by a piece Carey Nieuwhof wrote over at Orange Parents.

What’s the best thing I did this as a dad this year?

I started getting responses I knew they thought they wanted me to hear. Stuff like:

I had to stop them for a minute because I wanted each of them give a specific time during 2010 that they remember they loved the most, and after a minute or so, both of the girls started talking about the day this past summer we invited some of their friends from our old neighborhood over:

We all went and took a dip in the Hooch. Later on that evening (10pm’ish?) one of the girls yelled out in a very Cartmanesque voice:  “I WANT PIE!” Apparently that was a genius idea because then a mass storm of 6-10 year old girls started begging, and saying things like:

“can we get pie, pleeeease”

“Do they have Lemon Meringue?”

Countless other types of pies were mentioned, as well as begs and pleads and batting of eyelashes and hugs.

I was NOT giving in.

So after we got back from Kroger with all different types of pies, we ate. (defeat)

This is a VERY short summary of how it all went down, but I asked the girls why this stuck out so much to them, and why it made THIS the best thing I did as a dad in 2010.

Kiss said it was because I helped many of the girls trek across the treacherous rapids of the Hooch, and if they got scared I would lead them and encourage them to help overcome their fears (Nevermind that the Hooch is knee-high).

Madi just loved the fact that it was so late and even though I was tired, I took them to go get Pies.

So why did I ask them what was the best thing I did in 2010? Was it to boost my ego? Was it to just so I could hear once again how awesome I can be as a Dad? Or better yet was it so that the girls could hear themselves say how awesome a Dad I am? Was it any of these? Am I THAT narcissistic?

I’ll say yes to all the above, why?

I am not only trying to work on my weaknesses as a father, but I am also working on improving what I am naturally good at. You see, I’m tired of being a good dad.

I want to be a great dad.

What better way to really know what to work on, or that you are good at and what comes natural, than to ask your own children? They reminded me of how much I love to encourage, and that even though I can be a good leader, I definitely need to develop that area to be great.

I will dedicate more to time to get better at encouraging my children, and others. (Proverbs 22:6)

I will focus in on the strengths I possess as a leader, and develop them to the best I can by surrounding myself with, and seek wisdom of other great leaders.

That day on the Hooch and with the pies really taught me something, except I didn’t learn it until 7 months later.

I will repeat Carey’s question here as I am also curious, and this doesn’t exactly have to relate to being a parent.

11 responses to The Pie That Binds

Leave a Reply to Some Wise Guy Cancel reply