The 10 Types of Parents at a 5th Grade Graduation

Yesterday I got to witness my oldest daughter graduate from 5th grade. During the ceremony, in finding the “perfect” spot to record what I could with our budget-minded video camera, I noticed that I was not the only one trying to find “that” spot.

We had the full gamut of parents with all kinds of different memory-capturing gadgets. From cell phones to full on DSLR’s for the stills, and old school minidv camcorders to full on pro-sumer HDD cameras for video. I thought of a name for each one of these parents, and decided to add a couple of pictures along with them ala 10 types of Soccer Parents style.

Here I bring you: The 10 Types of Parents at a 5th Grade Graduation

This man (or woman) walks in front of everybody, with no regard as to if you are actually shooting video. All they care about is getting their shot, although sometimes they will yield to the guy with the bigger lens.

His ice-cold blood runs through his veins. There’s not a nervous shake at all as he can handle this camcorder without a tripod, and with one hand.

Image Stabilization? As if!

This guy has all kinds of attachments to his camera. Spot light, boom mic, lapel mic, monitor, steadicam, etc… I couldn’t grab a good photo of him, but just picture Data’s Dad from Goonies.

This guy refuses to shoot when all the kids get on stage, instead he goes against the flow and stands up in front of everybody to shoot backwards. He doesn’t care that his fly is down for everybody to see, all he cares about is the “entrance.”

Ok seriously, all the kids are coming from the back. What the heck are you looking at and shooting? The banner? Not to mention your arms/kleenex/camera are in the line-of-sight to me taking a shot of Joe Cool One Hander, have some respect!

I mean, c’mon. You’re not Ron Howard, so why do you need a 400mm f/2.8 lens inside of a freakin cafeteria? To see the fingernails on the diploma during the handoff?

(See Example A, to the right)

Really, no explanation here. Here’s the view before I moved.

All I can say is I feel bad for the guy who took my spot as I went ahead and turned into #1.

This guy is clearly here just to lovingly support his wife who is playing the Pomp and Circumstance on the piano for 2 hours straight.

Bless his heart, as long as he doesn’t get in my way.

This guy doesn’t mind taking a back-seat to all of the #1-8’s. Usually it’s an older fellow who is just trying to get “backup” for his grandkids. When viewing these pictures later on, they may or may not be blurry, tilted, and time-stamped.

This thing of beauty is a rare phenomenon. As you glance over, you notice this woman is holding a boy. 2’ish or so.  You think to yourself “great, I have to make sure they’re not within ear-shot of my boom mic,” but as the ceremony goes on, you notice something. As a parent, it’s hard to miss these kinds of things, but you see a lack of an assortment of snacks in her purse, and not even a cup of milk ready to shove down the boys throat should he even think of throwing a tantrum. Yet amazingly, he does not and he actually (unbelievably) behaves for the majority of the ceremony.

This woman definitely has skill. (ok until the end when he started whining “allll donnnnne?”) 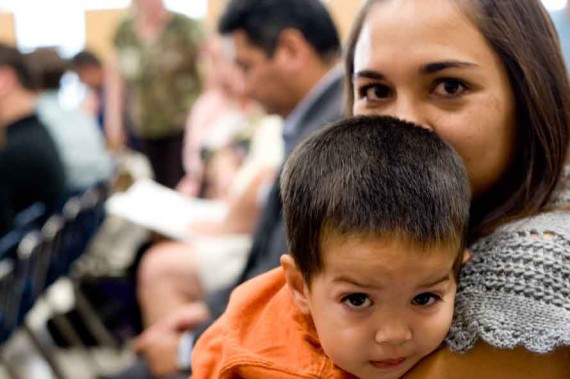 When was the last time you went to a graduation? Do you relate to any of these 10 above? Did I miss any?