A time in my life that I don’t care to revisit, is the time when I remember how much I hate the way I treated you.

Specifically the time during your marriage.

Prior to me getting married, and while you were married, there as a season of your life when going through what you were going through is not even something I can even imagine. In fact, I am ashamed of my thoughts of judgement when you decided to go down the point of no return. The decision to end your marriage devastated me and all that I believed to be true.

My heart was hard, and I can’t even imagine the pain it caused to know that me, as close as I am, couldn’t even feel like I was by your side through this most devastating season of your life.

I should have loved you more. END_OF_DOCUMENT_TOKEN_TO_BE_REPLACED

Actions, words, in person or even on social media. We all have the opportunity to present ourselves however we want.

In trying to rejuvenate my writing habits, I wanted to start by sharing the story of why we moved our family 20 miles across town. First, it all starts from back in 2006, when my job moved me and the fam from Phoenix, AZ to Atlanta, GA.

I knew that we had to soon find a place to go on Sunday’s, because well that was the thing to do, and as a Pastor’s Kid I knew it would click sooner or later why we did this “ritual” on Sundays. Perhaps it would seep into the rest of the family and hey, maybe we’ll even join a “bible study” on a Wednesday night or something. Who knows.
END_OF_DOCUMENT_TOKEN_TO_BE_REPLACED 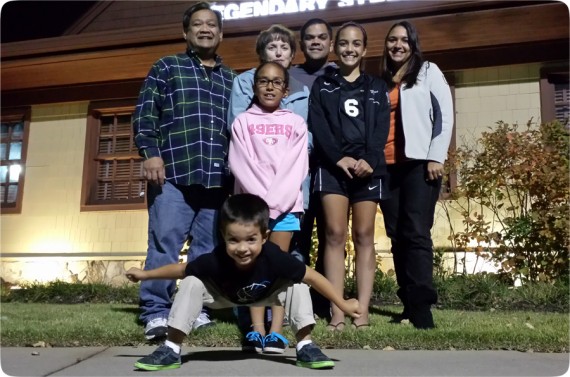 What an awesome family. Right? This was taken this past Sunday over at Stoney River for my 36th birthday. We are such a happy family, and wow am I blessed. A multi-race, functioning, nuclear family that is happy all the time… to which you could call BS, and I would just smile and nod. The reality is, this is truth and I believe it 100%.

END_OF_DOCUMENT_TOKEN_TO_BE_REPLACED

You’ve probably heard success stories about a kid who just showed up one day, awkward as all get out and uncomfortably inappropriate. Then a leader comes along and takes this boy under his wing and mentors him through the thick and thin, even getting him to head up prayer time. Well, Steven’s story is probably a really good example of one of these.

At least for the first half of that, not so much the 2nd.

I have hesitated writing this to you because I really want you to have your own experience with him. However, I wish somebody would have told me a little bit about his personality ahead of time, so hopefully by sharing this with you it will be a completely opposite story than mine. You see, the first time I met Steven was when he was in 7th grade. We were on our way to a weekend retreat, all piled up on the charter bus and he had asked to sit next to me. For the next hour and a half he told me his life story about being adopted, having his older brother yanked away, and hearing him justify the type of physical and verbal abuse he endured before getting adopted.

It’s the kind of story that is painful to hear, and as of writing this letter this story does not yet have a good ending. END_OF_DOCUMENT_TOKEN_TO_BE_REPLACED