Everybody has a story, big or small and I love hearing and reading about them. What I’ve not read or heard recently in the blogging community is about miracles. I’m not talking about “Oh, I had my electric bill that was past due and they were ready to shut it off but then a miracle happened where I won a scratcher at Circle-K” kind of miracle. I’m talking about seeing, hearing or reading about a real, true-life miracle.

I guess one can say that the actual word “miracle” can be subjective, for instance here is a story that could be looked at as a possible miracle or maybe just a mere coincidence. Here’s Tim telling it from his perspective:

So there’s the short version, along with a 2nd story just for your watching pleasure. Here’s my dramatic interpretation of “The Lake”:

When I was a counselor at a camp in California, under the direction of one of my closest friends Tim, the last day of that camp we had to say our goodbyes to the kids who were attending. We had to travel down the road about a half-mile with the kids and their luggage, since the charter buses couldn’t make it up to the campsite. After saying our goodbyes, both Tim and I thought it’d be a good idea to just make the hike through the woods off the road, instead of up the road back to the camp. For fun. During this hike we came to a point where we had to make a decision. Do we walk around the lake or do we attempt to swim across since it really was only about 100 yards to the camp. Ok maybe it was only 50-60 yards, but it seemed like a mile. Google says it was approximately 200 feet, so there.

With our clothes still on, pagers in one hand, paddling with the other AND our shoes still on, we attempted the swim. About halfway across the lake I started feeling like I was trying to swim while pulling a 350lb anchor. My shoes were the anchors, but I was so exhausted I couldn’t even think to go under and untie my shoes. I did, however, give  up on trying to keep my pager above water.

There I was in the middle of the lake, straight up and down trying with all my strength to tread water. I thought I could just hang out for a bit bobbing my head in and out of the water, taking small breaths of air to try and get enough strength for the remainder of the swim.

Correction, up and down gasping for air. At this point I started looking straight up both out, and while under water. It was so quiet and so peaceful, but I was entirely in panic mode for I could not swim any longer.

Then I heard the sound of splashing, somebody getting out of the water. My next trip to the surface I peeked over and saw Tim’s face. Pale white with terror, looking at me. He was terrified he was watching his best friend drown, right in front of his eyes. He could not do anything to save me for he was exhausted himself. I went back under, and back up. I couldn’t see him any longer.

At this point, after seeing his face I started talking to God, and asking him everything that I could think of. I asked why he put it on my heart that I was going to have and raise children, if I were to leave earth now.

I told God to not let the burden of me drowning stay with Tim, it was not his fault at all.

I thanked God for allowing me to live such a safe and blessed life, compared to what I was exposed to while my parents still served in The Salvation Army, such as under-served people and communities.

I praised God for being born in, and living in such a loving family with an awesome Father, Mother, Sister and Brother.

I told God that I was a fool for not thinking this through, I mean how stupid am I that I didn’t think my shoes would weigh me down so much.

I saw splashing, and soon I heard “Take my hand.”

I grabbed the hand, and started to move, getting towed by a pregnant woman, and her mother to the banks of the lake. I was safe, and I was alive. 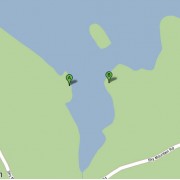 Tim says they were just there, swimming. Not affiliated with the camp we were at or anything. If you click on the map, you’ll see exactly where the camp is located. I’m not entirely great with google maps, but from what I could tell, I didn’t see a campground other than Sky Mountain. I think they may have even had a raft but I can’t remember clearly, so that is also a possibility

The way I see it, is that this fool’s God smacked me in the face and told me he wasn’t done with me yet, and even now I think that the women being there at that moment was more than just a coincidence. I know God had His hand on what went down at “The Lake,” and although I won’t go as far as to say it was a miracle, it is probably as close to one that I’ve experienced up until now.

I want to read, or hear, or see something big that God has done in your lives. He is not a small God, He is a GREAT God who does GREAT things. So tell me about them.

26 responses to A Fool’s God